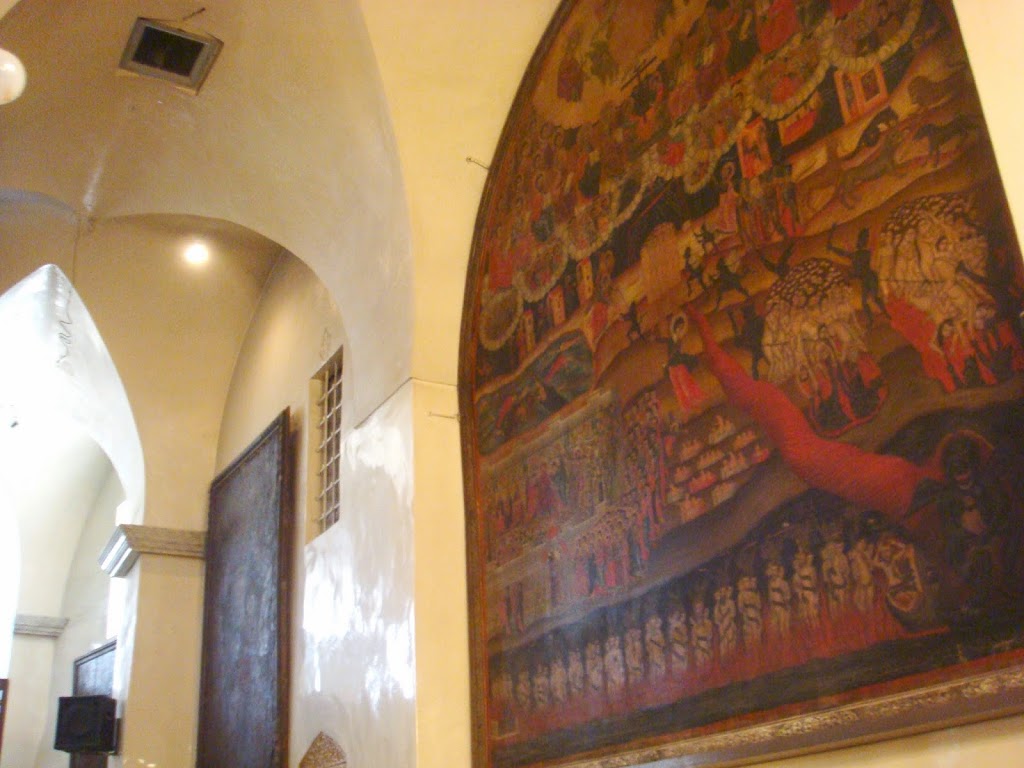 This 18th century painting represents the first chapter of my childhood;

– Look at all those people held by snakes.
– Those are satan’s soldiers, torturing bad people, and that’s satan in the corner.
– Bad people will end up there, in hell.

This was a sample of our childhood conversations at the Haygazian Armenian elementary school in Aleppo, which was in the same estate as the Forty Martyrs Armenian church, which was bombed and leveled two days ago.

Every Friday at 8 AM they took 5th and 6th graders to the church to practice the Holy Liturgy, we spent an hour and a half singing every week for months, preparing for the annual Armenian Genocide commemoration service on April 24th in the Armenian cemetery of Aleppo.

There were six guys in my 6th grade class, we had formed a gang, and were the trouble makers of the school that year. One of the little games we used to play during the Friday morning rehearsal was the “Yawning game”, which George from our group came up with, which basically was looking into the victim’s face during the rehearsal and faking a yawn, and the victim would start yawning for real within seconds. Mr. Vahe, the music teacher or Der Yeznig the priest and our religion teacher would make angry eye contact with the victim, which basically for a 11 year old meant doom.

My friends Alex and Tavit, were the masters of the spit balls, and the main weapon of the rest of us were the rubber band slingshots, of course a regular book would become a “pizza” shot as we called them, if needed.

The estate also included the center of “Hamazkayin” the Armenian Educational & Cultural Society, with the Arshile Gorky academy, the music halls and the offices. One of the most interesting memories associated with this place was the rumor we kept hearing during every break between classes in the school yard, – “Jesus is playing piano in the hall upstairs”. Everybody would run over to sneak behind the door and listen “Jesus” play the piano, which actually was Maestro Sedrak Yerkanyan, who back then was the conductor of Hamazkayin’s Zvartnots choir, we confused him with Jesus because of his very long hair.

Those days are just memories from my childhood now, alongside thousands of others, from the Forty Martyrs church, The Haygazian school, and the narrow streets around them.
The characters and places behind those memories are gone now. Days after the centennial of the Armenian Genocide the place where we commemorated the event as children was bombed and brought down to the ground, all that is left is a destroyed belfry and the six young men that shared memories in that church. It is hard now to get together and relive the past with my friends as we are all living all over the world; from Worcester, Massachusetts to Yerevan, Armenia to Beirut, and Aleppo. The last time I saw those guys was the last time I visited Syria back in 2010, months before the conflict started. I don’t know if the six of us will be in the same place again together, but I’m sure each of us will hold onto those memories, and remember the first chapter of our lives every time we use a pen or a rubber band like the ones we used when we were young trouble-makers. I know I still look at these simple things and smile when I am reminded of those days, it is something that will always trigger memories of the past.